After having met with my group, and discussed on Whatsapp some of the results – a drafted temptative plan of potential topic ideas was structured. We knew we wanted to talk about Classics: Google vs. Lebanese Schools.
More specifically, the extent to which lebanese young adults/the ministry of education’s taste in books was coherent with what the rest of the world would recognize as a classic.

Starting from there, we got a few ideas:

The first was connected with the Arabic language – We noticed the PU schools assigned more arabic literature than the PR ones.
From there, we went into the subject of emotions. Did books that were assigned by the school have more of a “boring” or “passive” impact on the student’s emotion than books he read with his own will? If we were to consider that a few decades ago reading was more in vogue, and people were more interested in literature regardless of its level of suspense/humor/action (having reading as a main tool of entertainment automatically affects the person’s emotional feedback); then did high schools, through time, alter their assigned literature in a way that would interest more the students personally/according to recent events/culture, hence bending away from classics?
I think it would be interesting to be looking at that phenomena, however I don’t think a “spatial” map will help out, I will also need to figure out a way to filter the information accordingly.

Another very interesting aspect I found was the relationship of the recurrence of the book in our list/the interest in it vs. whether it was interpreted in a movie or not. Indeed, a lot of people I know only read the book after having watched the movie – or read the book before the screening of the movie – or even bought the whole sequel in order to anticipate what would happen in the next movie. Sometimes, when the movie reaches the deep emotions of the person, the famous “you should see how even better the book is” leads to a popularity explosion of the book.
Some might look at it in a different way however; movies impose on the reader faces/colors/voices and limit the reader’s imagination during the reading, which could decrease and bias the cathartic impact on the reader.

Finally, it is clear that I’m still confused on the direction I am willing to take regarding my research – but with the support of my group and a more clear and filtered data, I’m positive that I’ll get somewhere and draw an intersting conclusion. Anyhow, in case I don’t get there, the course of the research would’ve brought me experience and maybe opened doors to topics that should be tackled in a different manner. 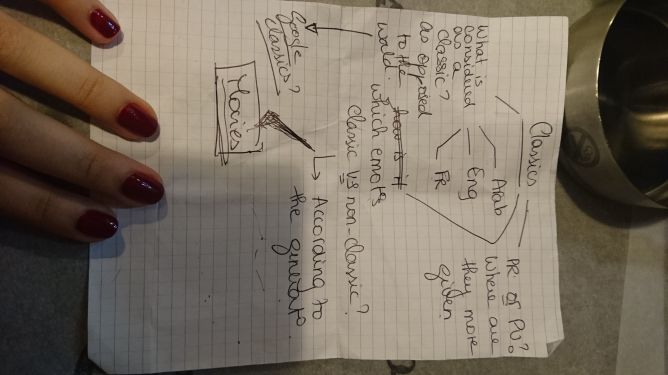 Welcome to another one of our mapping projects at the English Department at AUB.
This one is assigned in ENGL 207 – Introduction to Literature II.

In this course, we will try to come up with a correlation between the books high school students have read in Lebanon (during their free time or assigned by a professor) through time, space and emotional response.
In order to do so, we were divided in groups of three. I have collaborated with a similar group in another literature course, in a digital project as well. Therefore, I’m not worried about the workflow in a team, as I am used to having the tasks divided upon students from different majors and backgrounds.

We still haven’t figured out how to divide the work; our data isn’t complete yet, and we’d rather assign each group member a task that goes in line with his skills and interests. Needless to say, we will have the tasks assigned equally and will keep submissions and finalization to be done as a team.

It is still too early to say what will come out of this digital project. I’m suspecting a strong contrast between pre-civil war and post-civil war literature assigned in Lebanese High Schools. I also think that certain canonicity in classical literature will appear. Indeed, and with the little amount of data I have gathered for now; traditional authors such as Shakespeare, poets such as Blake and novelists such as George Orwell are recurrent in almost every interviewee’s answers. I’d primarily conclude that the universality concerning politics, social issues and the human condition that are predominant in their works persuade the Educational Institutions into assigning them to future leaders, craftsmen and activists.

Finally, I think that we should add to the interview the language in which their school is based, especially if it’s a French one. The French mandate in Lebanon had a huge impact on Education – most of the assigned literature during/after the mandate was in French, and at some point, speaking the Arabic language was forbidden in High Schools.

Also, given the fact that the amount of students who read (21st Century Graduates) has significantly decreased, it would be interesting to look at what they would read in their free time. What kind of books attracts students in a world where reading is less in vogue than ever? Can we find a pattern? Are those books related to movies that were released, true stories?

Moreover, I think we should add a document of the possible biases/exceptions/obstacles that we might face as researchers, in order for our conclusions to be meticulously narrowed down.

I expect a lot of complications from this research project, and maybe now the whole process isn’t clear enough. However, I have worked on a mapping project in the previous course and the results amazed me; I still read my analysis to scholars and show the maps to friends.